This month marks one year since I bought a Nexus 5X and started using LineageOS, so I thought I'd share my experience.

About one year ago, a friend told me he found a really good deal for a Nexus 5X online. The Nexus 5X is an old phone by now, launched in 2015, so it tends to be fairly cheap, even though it's still a rather decent phone by today's standards. The offer he found was for a new Nexus 5X, which came inside the original box, perfectly conserved, and still cost only R$ 300. Really good deal.

At this point I had already been using Linux on my computer for some years, but my phone, arguably the machine that has access to the biggest amount of personal data, was still running Android, which is an OS that is not entirely FOSS, and that bothered me quite a bit.

I had already had the desire to switch to LineageOS, the FOSS alternative to Android, for some time now, but since it was my only phone it felt like putting too much at stake. With the possibility of getting a new Nexus 5X suddenly I saw the opportunity of having a tried and tested (and loved) phone with LineageOS, and if all went wrong, my older phone would still be there with everything the same way it was. So I decided to get a Nexus for me as well.

I followed my friend's Nexus 5X guide and had some personal help from him in order to understand the required software components to be able to run a LineageOS installation completely de-Googled. In my case the phone was brand new so I could use the image without the BLOD patch and enjoy full Nexus 5X performance.

The installation itself was easy to follow (granted I had a guide and a mentor). And at the end I had the phone with LineageOS, MicroG and Magisk, completely de-Googled and yet able to install software that relied on Google Services when needed.

Overall the experience is great, but there are two main issues:

But those are software issues and could be eventually fixed. There is however one single hardware limitation on the Nexus 5X that made me disappointed as soon as I realized: There's only 16GB of internal storage and no external storage card slot.

For the apps themselves 16GB can actually be ok, but for taking pictures or videos and storing music, it wasn't enough.

But I didn't give up immediately on the matter. The phone was so close to perfect, I needed to find a workaround for the lack of storage space.

The Nexus 5X has an USB-C OTG port, so I realized I could buy a USB-C flash drive, the smallest possible so that it wouldn't be too intrusive, in order to effectively expand the storage space.

After researching for a bit, the most compact USB-C flash drive I found was the Kingston DTDUO3C/128GB. So I went ahead and bought it. Right after it arrived I noticed that it comes with a little keyring and that my phone case had a slot for that, so I tied it there and thought it looked cute. It's also way easier to keep it always together with the phone this way. That said there are some drawbacks: the USB drive sometimes gets stuck in my pocket, and also hits the screen. This is how it looks: 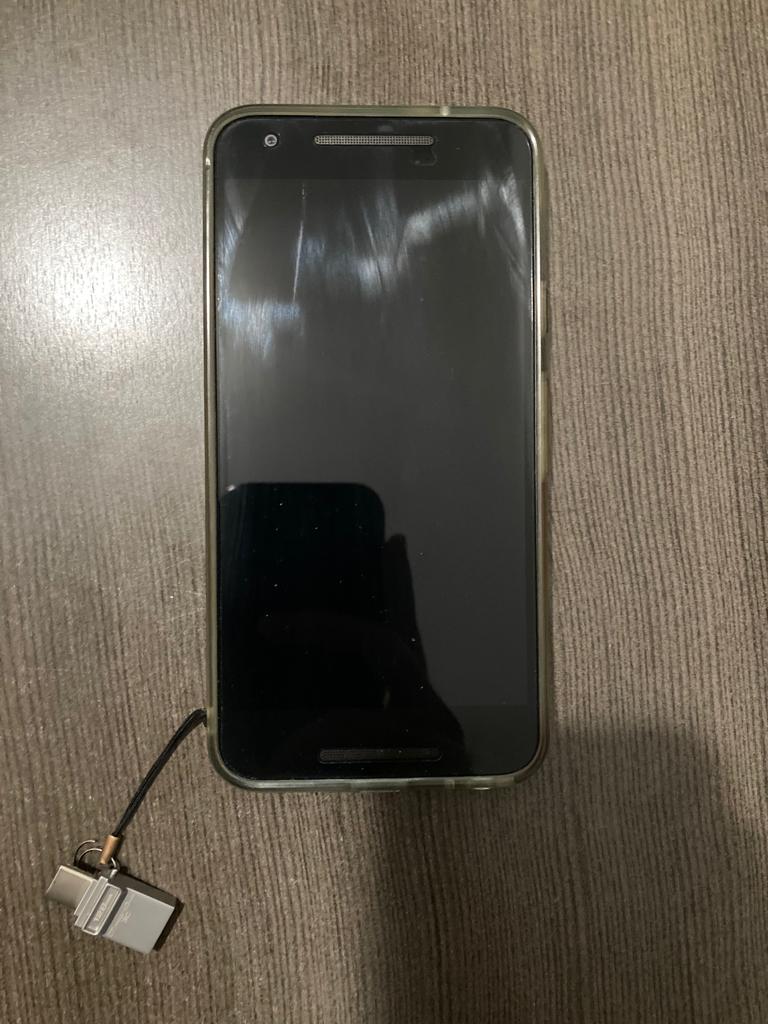 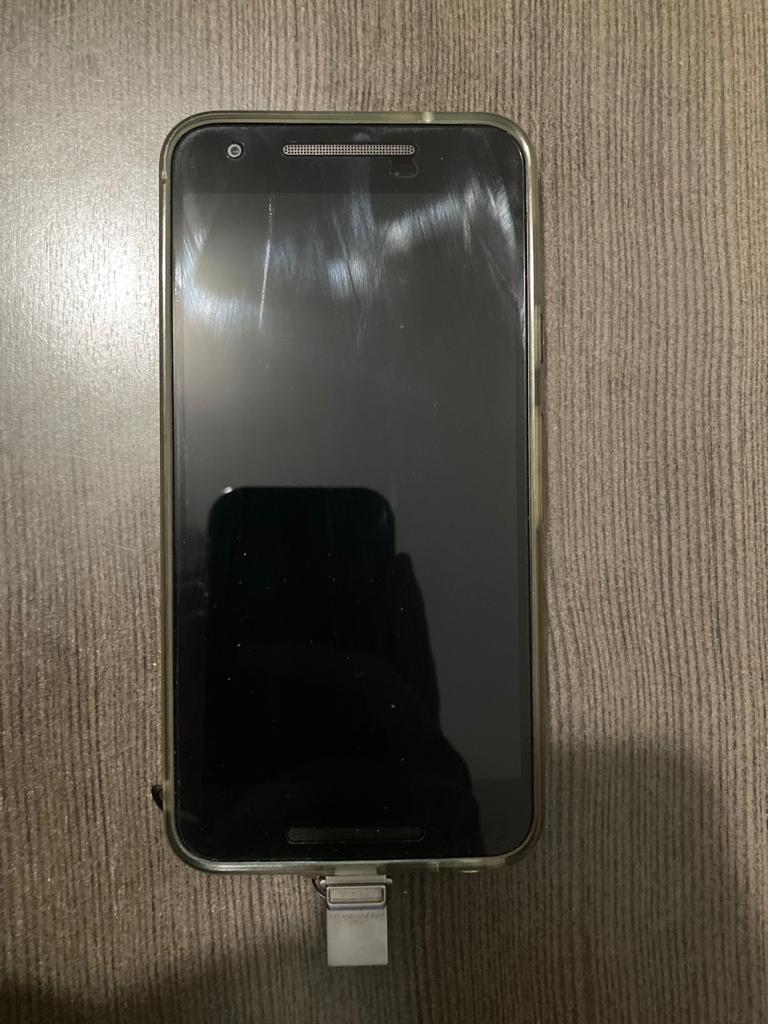 However, as I inserted the flash drive I was disappointed to see that my music player didn't recognize any of the music in there. It seemed that the flash drive was just like a dumb storage and I could only move files to/from it from the file manager.

But given that this was weird, I thought there needed to be a way around it. After all, it's just an arbitrary limitation imposed by Android. After a bit of research, sure enough, a post in the XDA forum came to rescue with a one-liner solution:

And just like that, reinserting the USB flash drive made the music player app hurringly start indexing all the music files it had just found in the flash drive. It worked!

There is one big caveat with this however, which is that I need to remember to always insert the USB drive before opening the music player, and closing it before removing the drive. Otherwise the player no longer sees any music on the device, and the next time I plug the drive in, it spends a couple minutes indexing all the files again (and crashing a few times during the process).

Given that I'd need my music files (and possibly photos) to be synchronized with the computer, I was also interested in getting Syncthing working with folders in the USB drive.

To my surprise it didn't work at first: Syncthing has read-only permission to external storage. But I quickly found out that giving it root permission removes this limitation, which can be done through Magisk. Not the ideal solution, but at least this gives a working setup for music!

I was also curious to see if I could have the camera save photos and videos directly to the USB drive. This would lift most of my concerns about being short on storage.

In order to not fiddle with the main camera app settings, I downloaded the Simple Camera app to try this out on, and configured it to save to a folder in the USB storage. To my surprise it simply asked for permission to have write-access to the USB, not requiring to be run as root like Syncthing did.

I then tried recording a video on it. On the first try it threw an error and asked me to select the image quality and I lowered it to 1080p. I think the write speed on the USB couldn't cope with whatever the original resolution was.

After that though, it did manage to successfully take pictures and record videos. However right after I stop recording a video the app closes, but the file does seem to be flushed correctly to the USB storage and sync'ed with my computer.

But actually so far I have avoided using the USB storage for the camera (by using the original camera app), because, unlike for music, taking pictures/videos is time-sensitive, and I don't want to risk having my pictures fail to save or take multiple tries (the app crashing is enough already). In any case it's good to know that it works, to some extent, for when I want to use the camera and the internal storage is full.

But something else happened when I set that force-adoptable configuration. While browsing in the settings, it looked like I now could actually format the flash drive as internal storage. This would mean that the flash drive memory would be used transparently, even to hold app instalations. But a question came to mind: "What would then happen when I removed the flash drive?". There was only one way to find out if this was usable or not...

It took something like 30 minutes for the flash drive to be formatted and most of the internal storage data to be moved to it. But at the end of that I had successfully extended my storage by 128GB. And it felt... really sluggish. The whole system would stutter all the time. Turns out that the USB flash drive speed is a lot slower than the internal storage. And now that the system depended on those transfers it was really noticeable.

But maybe I could live with a slower phone in exchange for more storage space, right? What about the big question: was does happen when I remove the USB drive? This is really important to know given that I'd need to remove it at least to charge the phone every day or so. And the answer is: the phone doesn't like it all. The system reboots 😝.

I spent almost three days like this: With a phone with a giant 128GB storage space, but that was laggy and would reboot every time I needed to recharge it (which also happened more often as it turns out that the flash drive drains quite a bit of battery while plugged in).

At the end of those three days I had had enough of it so I reformated the flash drive as external storage and went back to the previous setup. It was an interesting (although frustrating) experiment.

App-wise, I try as much as possible to use apps from the F-Droid store, but there are a handful of apps that I still need to use from the PlayStore. Luckily, there's the builtin app AuroraStore for that, which at least provides a privacy-friendly version of the PlayStore.

For the apps that I have installed from F-Droid, here are the ones that I really like:

I don't know how long I'll go on using this phone, but I'm surely not going back to Android. I'll either stay with LineageOS or maybe take the plunge to PostmarketOS, if the user experience is in the JustWorksTM level by then (or not if I feel like I suddenly have a bunch of free time 😝). Either way I'm going to make sure my next phone has a bit more storage space 🙂.